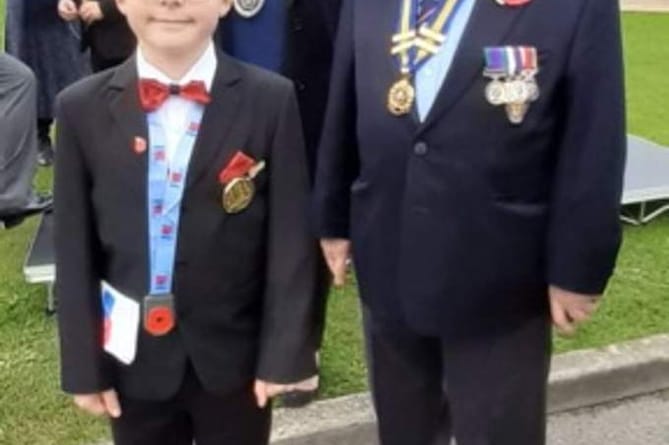 AFTER last year’s success of his 200k Poppy Run, 10-year-old Kieran Ongley from Bude decided to enter for the Royal British Legion’s Poppy Run again and has so far raised over £200 this month.

Kieran is hoping to raise more than double that before the deadline on November 30 and was over the moon on Saturday when Morrisons agreed to hold a collection bucket to try and help him reach his target.

Kieran was blown away when Godfrey Harrison of Bude’s Royal British Legion asked him to lay a wreath on behalf of the youth of Bude during Sunday’s Remembrance service.

Kieran said he was “honoured” to stand with such heroes and has been keen to do more to help raise both awareness of the Legion as well as donations for them. Adding: “If all of the children in Bude did a little the future could be great!”

Kieran experienced such a sense of community when his ‘strange’ request to have a medallion mounted in silver was granted. He was desperate to wear the medallion – not a wearable one – presented to him last year by the Royal British Legion, so his mother turned to a local jeweller to help turn it into one he could wear for the parade.

He would sincerely like to thank the three local jewellers Jacinta McEwan, Emily Badrick and Stacey West for their support. He is so proud to live in Bude with such wonderful people and his mother added: “I am so proud to shop local and support local businesses! What an amazing credit these three ladies have been to this town.

“Kieran has already raised more than £200 so far this month for the Royal British Legion with his 100k Poppy Run and it is because of people like these three ladies that is inspired and motivated to help his community.”