Brenton century sends Callington into next round of National Club Championship 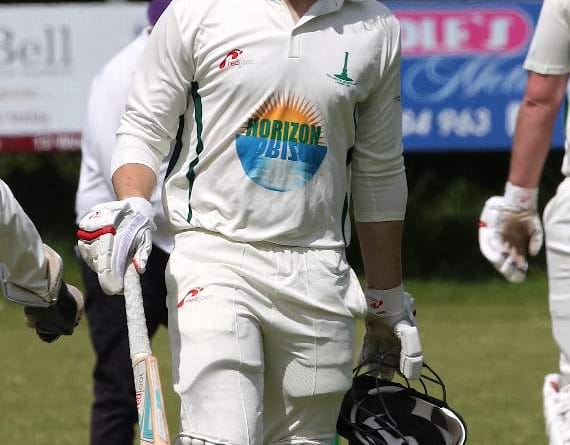 Callington opener Luke Brenton walks off after a 76-ball 103 that contained ten fours and seven sixes.

Luke Brenton struck a majestic century as Callington edged past Devon Premier League leaders Paignton by the slimmest of margins to set up a tie with West of England Premier One side Bridgwater later this month, writes Lewis Bond.

Home skipper Joe White won the toss and decided to bat on a sunny afternoon, in this 40-over-a-side match.

He then sat back and watched Aidan Libby and Luke Brenton get Callington off to an explosive start, putting on an opening partnership of 80 in eight overs, when Libby edged a Luke Medlock delivery to keeper Joel Ashworth, after scoring his second successive 41 of the weekend.

Brenton then started to hit out, and his 50 came up in 29 balls. He and Dan Davis added 55 before Davis was brilliantly caught one-handed by Medlock at slip off Sri Lankan professional Sehan Weerasinghe.

Brenton continued to take no prisoners, and was eventually out with the score on 175 after smashing 103 runs in 76 balls, including 10 fours and seven sixes.

Danny Carroll and Ryan Brown both contributed, as Callington were dismissed for 219 in 39 overs. Weerasighe took 4-34 and Sam Woodcock 2-21.

Callington opened their reply with 14-year-old seamer Ben Alford, and he bowled Harry Ward with his fifth ball.

Brenton caught Cole Harford at cover off Rob Mutch, and Alford also bagged the wicket of Medlock, thanks to a catch by wicket-keeper Nick Parker.

Sam Robbins had put bat to ball to make 37, but when he too was caught by Parker off Libby, that left Paignton at 58-4 and Callington were on top.

However, Weerasinghe and Archie Farkins turned the tables with a stand of 83, despite Weerasinghe suffering a twisted ankle.

He was out for 51 in 64 balls, when he was caught at mid-on by Alford off Harry Sawyers.

Farkins went on to make 53 before falling to a Mutch catch off Libby. However, Paignton were still not done, and Joel Ashworth made an important 20 before being bowled by Libby.

It all came down to Paignton needing nine off the last over, to be bowled by Mutch.

That boiled down to three to win off the last ball, although two to tie would see the visitors home as they had lost fewer wickets.

Mutch bowled the ball, Sam Woodcock swung and missed, and the ball went through to Parker, keeping the visitors down to a single, meaning that Callington won this great game of cricket by one run.

Libby took 3-30 from eight overs, and Alford 2-51. Callington are now at home to Bridgwater in Round Three on Sunday, June 27.