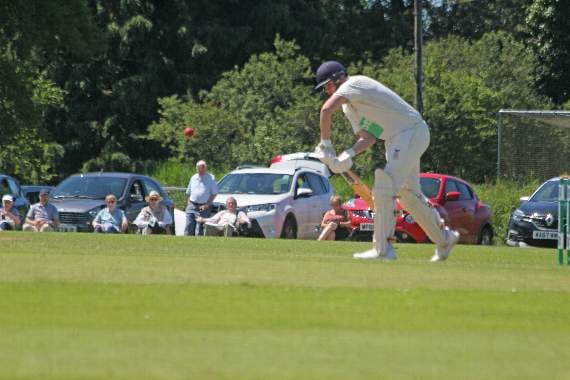 John Moon on his way to scoring 74 against Penzance. Picture: Paul Hamlyn

WITH the weather finally playing ball, a full programme was played in the Bond Timber Cornwall Cricket League on Saturday.

In the ECB Cornwall Premier League, Callington were brought back down to earth in dramatic circumstances at Truro, being bowled out for just 51 before the city club eased to a nine-wicket success (report, see this week’s paper).

John Moon hit a Premier League best of 74 as Werrington pushed champions Penzance all the way at Ladycross, before Tom Dinnis’ six off the penultimate ball ensured the visitors chased down 220 with three wickets to spare (report, see this week’s paper).

Elsewhere in the top flight, St Just were knocked off the top of the table following a 23-run defeat at home to Camborne, Redruth earned an impressive 27-run success against visiting Wadebridge, while St Austell hammered neighbours Grampound Road by nine wickets at Wheal Eliza after being set just 143 to win.

In County One, half centuries from Taylor Gerry and Ian Searle, before four wickets from Nick Ward, gave Werrington seconds a 62-run success at Lanhydrock (report, see this week’s paper).

Elsewhere, Hayle are 13 points clear of Helston at the top following a ten-wicket victory at struggling Gorran.

Helston lost by three wickets at Falmouth, who are now third, while there were also convincing victories for Paul at home to Redruth seconds and for Beacon at Newquay.

St Erme won by just a solitary run at home to bottom side St Austell seconds, whose wait for a win in County One reads 31 matches.

Menheniot made just 160 all out, Mike Maiden top scoring with 44, but Rob Cowley’s 3-16 propelled the East Cornwall side to a precious 13-run win.

In Division Three East, Blaze Eigenmann smashed 134 not out as Callington thirds picked up 19 points with an 88-run victory at Launceston seconds.

Half centuries from Charlie Coates (52) and Danny Carroll (50) plus a pair of 24s from Alex Robinson and Toby Beresford-Power got them up to an imposing 320-5. Paddy Webber took 2-59 with his slow bowling.

With a strong batting line-up, Launceston made a good fist of the reply, although a poor start cost them as Toby Morgan (3-77) did the damage.

Jon Niblett struck his third league century of the season as his unbeaten 122 propelled the hosts to 254-3. He was ably supported by Dave Smith’s 44 and John Sleep’s unbeaten 36.

All of Newquay’s top five passed 20 as they reached 233-4. However, Chris Jordan’s dismissal for 57 prompted an incredible collapse as Emily Geach took 6-45 off 10.3 overs. Geach ably backed up by Niblett’s off-spin which took 3-21 off five overs.

South Petherwin are up to fourth after a four-wicket victory at Bugle.

The hosts stuttered their way to 154-9 after winning the toss with all five of Petherwin’s bowlers doing their job.

And although Bugle kept taking wickets, Paul Clements showed a steady hand to end on 41 not out, as Petherwin made it three wins on the spin.

Skipper Andrew Tamblyn top-scored with 60 in their 270-8, with Nathan Searle (44), Sam Pluckrose (41no) and David Eldridge (34) also making handy contributions.

Ben Sonely was the pick of the Tron bowlers with 2-42 from his ten overs.

With several players missing, Werrington put up a determined response to end on 219-3.

Roche seconds ran out emphatic winners at home to their Bude counterparts.

The Clay Country club totted up 271 all out thanks to half centuries from Reuben Trethewey (71) and Michael Sweet (52). Veteran spinner Mike Taylor picked up 6-61 off his 12 overs.

Luckett are 38 points clear at the top of Division Four East following a five-wicket win at Milton Abbot.

The hosts ground their way to just 138-5 off their 40 overs at Baxter Park, with Paul Crocker batting the whole innings for 42.

Jonathan Elliot made 38 and Charles Helyer 18, in a curious display. Adrian Berry took 3-27, while none of the five bowlers used went for more than five an over.

Luckett raced home with over 12 overs to go thanks to Berry’s 61, while Martin Budge also made 20. Steve Payne took 2-25 off his seven overs.

Seven Petherwin batsmen reached double figures in their 127 all out, with Clements top-scoring with 21.

Mohamed Durrani-Zubair made 85 while Tom Harris weighed in with 33 in the home side’s 175-9. Third change bowler Mark Rundle then kept his cool, as he picked up 5-21, including the dangerous Chris Davey for 74, as Grampound ended on 164-9. Giles Francis (2-27) and Chris Crabb (2-44) were also amongst the wickets.

An understrength Duloe were hammered at Wadebridge thirds who moved above Lanhydrock seconds as a result.

With the Bodmin-based club having their bye week, Wadebridge took advantage to rack up 292-7 at Pencarrow.

Duloe were bowled out for just 64 in reply, Simon Massey making 35 of those.

In Division Five East, Liskeard laid down a marker by easing to a seven-wicket at leaders St Stephen (report, see page 26).

Liskeard were guided home by opener Tim Hyslop (see report, page 26). The veteran right-hander stayed in at one end for his unbeaten 59 with the hard-hitting Cobb thrashing 66 before he was caught. Brian Phillips’ 17 not out ensured a comfortable win with 33 balls to spare.

St Minver batted out their overs to reach 140-5. Opener Jake Keast made 54 with Leigh Durrant (30no) and Alfie Dawes (20) also passing 20. Peter Bassett had the superb figures of 1-10 off his ten overs, while teenager Isaac Jago took 2-21 off his seven.

Tintagel recorded a five-wicket win over Newquay thirds with five balls to spare at Butts Field.

All six home bowlers took a wicket in Newquay’s total of 155-6, with James Ellis going for just 19 off his eight overs.

The home reply saw Stephen Roach make 37, but at 115-5 the game was in the balance. But Frank Page (27no) and Kane Hartland (12no) kept their heads to move Tintagel up to fourth.

Foxhole are fifth after a nine-wicket success at Tideford seconds.

Tideford made just 100 all out with Duncan Nobes making 58, which the visitors past with just one wicket down.

In Division Six, leaders Holsworthy kept up their good form with a comfortable victory at Launceston thirds.

Thirteen-year-old Zander Zambuni struck 57 and Lewis Matthews 30 in the home response which finished on a respectable 173-6. Will Priest backed up his 26 not out with 2-25 for Holsworthy, while Snell claimed 2-19 off eight.

Boconnoc seconds fell to defeat at Duloe against Menheniot-Looe thirds.

Matt Middleton’s 72 helped Boconnoc up to 182-4, but Phil Shepley’s rapid 87, plus 41 from veteran Michael Conbeer, saw the home side over the line by six wickets.

Stephen Lees and Sam Millatt both struck centuries but it was Millatt’s Saltash St Stephens seconds who won the day at Gunnislake.

Lees made exactly half of Gunnislake’s 204-7, with Kevin Beare (42) and Stephen Parsons (19) also contributing.

Tim Phillips kept the visitors in the game with 6-40 off ten overs.

The reply was finished with three overs to go as Millatt made 127 not out. He received good support from Chris Marsh (22) and Phillips (21) in their seven-wicket success.