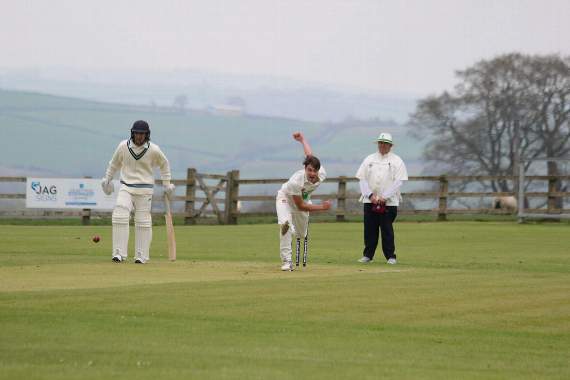 DAN Barnard and Ben Smeeth shared six wickets, but it was Wadebridge who were on top when rain caused their clash at Egloshayle Park to be abandoned.

On a belting batting pitch, half centuries from former Werrington men Matt Robins and James Turpin helped the Swans total 206-7 before they declared to hope to get some wickets before the predicted rain set in.

However, with the Werrington reply due to start at 4.15pm, the weather gradually got worse, with the game being called off an hour or so later.

With the forecast not looking good, Werrington skipper Nick Lawson won the toss and chose to bowl, and was rewarded quickly as an Barnard inswinger hit the top of Tom Mclachlan’s (1) leg stump.

Matt Jolliffe (11) had struck a couple of early boundaries off Jordan Duke, but was gone in the sixth over as he could only get a feather on a cut shot off Barnard, and was caught behind by Lawson.

Wadebridge’s middle order is as good as any in the county, and in Robins and Turpin they had the perfect combination for the situation. They added 147 in 31.3 overs before Robins advanced down the wicket to Smeeth to thrash him through the off-side but missed and was stumped for 70 off 105 balls.

With Wadebridge looking to get to 200 as quickly as possible and then declare, Werrington were able to pick up some cheap wickets.

Matt Butler (2) was caught at long-on by John Moon off the wily Smeeth before Kelvin Snell was caught by the same man soon after off Jason Seldon (1-45) for seven.

The final wicket to fall to spin was that of Callum Wilson (1), superbly caught by teenager Hugh Tomkinson off Smeeth (3-42), who had run around from the square-leg boundary towards mid-wicket.

Turpin was still there, however. He smashed the returning Barnard (3-29) for two consecutive sixes to reach 97, before skying the very next ball to cover where Mark Gribble held on.

Wilson then declared with 206 on the board and 45 balls remaining.

But as they went off for tea, the predicted weather came in, and that was that by 5.30pm.

Lawson was delighted with how Barnard stepped up to the plate.

He said: “I won the toss and chose to bowl purely because of the weather conditions. I thought it’d be easier to pick up points bowling first, and then we could assess what we needed to do at tea and go from there. Barny (Dan Barnard) bowled really well for us and got us a couple of early wickets which we’ve been desperate for. We wanted to get Mini and Turps in early on when the ball is doing a bit, but they’re good players and went about posting a good score.

“Jason and Snippy (Ian Worsnip) bowled quite well, but the pitch was pretty flat, and once the shine had gone off the ball, it became straight up and down.

“When Mini and Turps were going so well, at one point it looked like they could get 260 or 270, so we knew they were going to declare, so we decided to slow the game down a bit, and once Mini got out, we picked up a few quick wickets which made it difficult for them to score quickly.

“On such a flat pitch, we were upbeat about trying to chase it, but we didn’t have to.”

Champions Penzance are the visitors to Ladycross this weekend (1pm), and with Werrington yet to win in four starts, the visitors will be expected to win handsomely, not that Lawson is worried.

He said: “In a way the pressure is completely off us on Saturday. Everyone is expecting Penzance to come up here and beat us, so we can just go out there and play cricket, it’s a funny old game!”