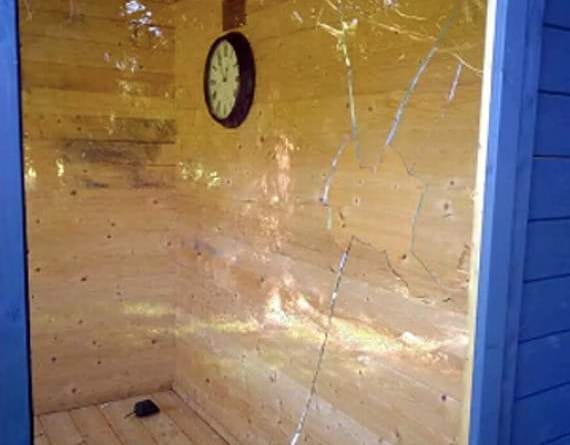 The damage to the starters hut windows.

LAUNCESTON Golf Club secretary Alan Creber has bemoaned the club’s luck as they continue to deal with break-ins.

The course, situated in the St Stephens area of the town, has been the target of vandals who have broken into the buggy sheds and caused damage to the course amongst other things.

Alan said: “It’s an absolute nightmare with people just having a laugh at our expense. We’ve had a few incidents and also this week there’s been an incident at Cowslip.

“Werrington Park have also had a couple of issues with hay bales being set on fire and a lodge which had been let out, was broken into a couple of weeks ago, so it’s certainly not an isolated incident.”

Motorcyclist dies in crash at Horningtops

“For us, the first incident, they slid under the greenkeepers shed door and took some keys and bits and pieces.

“Last weekend they threw some tee markers through the starters hut window. This is extremely poor behaviour as the hut was paid for and given to the club by a member. It’s extremely frustrating.

“We think it’s all happening between 11 and 12 o’clock at night. There have been a couple of reports from those who live close to the course. We had a meeting with the local residents association yesterday [Wednesday, August 25] with residents now concerned. As a club we are now looking into the possibility of getting CCTV. We would ask anyone who might have any information to get in touch or if anyone sees or hears anything suspicious to contact the police immediately.”