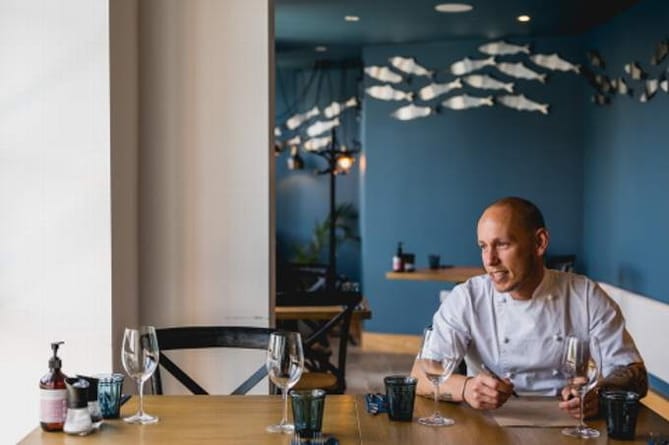 Benjamin Palmer aka ‘The Sardine Chef’

CHAMPIONING the humble sardine, head chef and owner of The Sardine Factory in Looe Benjamin Palmer, invited the Post down to experience first hand his restaurant’s ethos that puts local seasonal produce and sustainability first.

Ben moved to Looe originally with his family when he was just four years old and instantly fell in love with the town and its fishing heritage. Recounting his earliest memory, he said: “I actually used to come down here and fish right outside this building. It was the Fisherman’s Stores back then, and now it is my restaurant — crazy!”

Ben later moved away, taking some time to study with the likes of Tom Kerridge and Gordon Ramsay before appearing Masterchef: The Professionals, making it to the quarter finals aged just 25.

His talent is reflected in his work, and he has accumulated quite an impressive resumé. He previously owned The Greedy Goose in Plymouth earning 2AA* within just four weeks of being open, earned Barclay House 2AA* (Looe), was head chef for The Tanner Bros at The Barbican Kitchen, and was executive chef at Glazebrook House, in South Brent before buying the brothers’ fine dining restaurant Tanners from them in 2014 with his now wife, Francesca — but his heart remained in Looe and in 2018 he returned home with his family, including his three children Molly aged 11, Bobby aged 8 and Loa aged four, to embark on his latest venture.

Way To Work is just the job for employers and candidates

“I did move away but I always wanted to come back to Looe. I’ve owned this restaurant for about three years now and it has been a great three years. We have gone from strength to strength and I couldn’t be happier.”

The Sardine Factory can host 80 covers and overlooks the stunning harbour with a menu reflecting the ethos of Looe and Ben’s passion for local seasonal produce, with an abundance of sustainable fish dishes.

Walking into the restaurant you are greeted by the friendly staff and a comforting atmosphere.

The property has been sympathetically transformed and makes great use of its own history: “Below us is the museum which tells the history of the building. It is an important part of Looe’s history. We also have these great floor to ceiling windows which used to be the hatches where the sardines were hauled into the factory — the view really is spectacular.”

The scene across the harbour really adds to the overall experience, providing a serene and tranquil backdrop. With an open kitchen, diners are able to see the freshly caught local fish being prepared by the experienced team in a simplistic, yet exciting way.

Ben and his team were delighted when the restaurant received the prestigious accolade of a Michelin Bib Gourmand in 2020, which Ben puts down to their no-nonsense approach: “We let the produce speak for itself. We don’t fuss around with it, because we don’t need to — we want the local produce to shine.”

And it certainly does. The fish of the day is decided by what is fresh off the boat and of course Ben has been named ‘The Sardine Chef’ with good reason...

“We have focused on the humble sardine. It is just such an underrated fish but with so much potential. One of the dishes we are well known for is our Pilchard Paté as well as our infamous Stargazy Pie. They are both proper, classic dishes made with local fresh produce — something we are really championing!”

We can pay testament to that — the paté in particular proved to be a perfectly balanced dish which celebrated the sardine in the best possible way.

A trip to The Sardine Factory is highly recommended if you’re in the market for fresh local fish and a relaxed and friendly atmosphere.