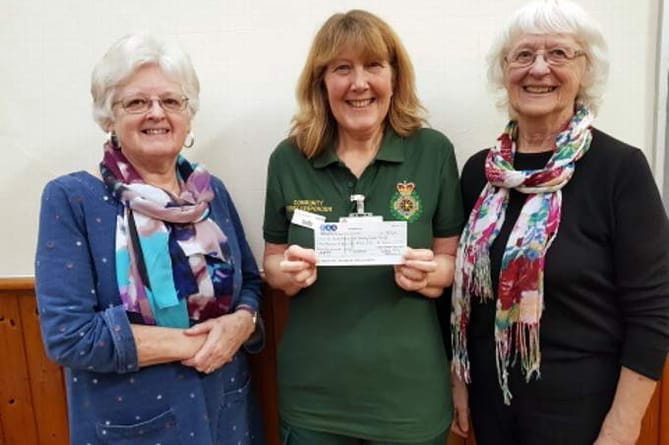 Bude WI are well known for their fundraising on behalf of local charities and the president and Ruth Pearce (treasurer) presented Sally Bickle, on behalf of Bude First Responders, with a cheque for £1,420. Sally said the money would be used to purchase lifting apparatus for use in road accidents and falls.

The treasurer then presented the audited accounts and circulated the full details to all members. Mr David Coney was reappointed as independent financial examiner. This was followed by reports by the president and secretary.

The tellers then asked for nominations for president, and only one nominee, the current president, Carol, agreed to stand.

The membership agreed to her election by a unanimous show of hands.

Each month there are two competitions, and a quarterly bake off, each of which award entries points dependant on their winning position.

These points are added up over the year and the outright winners are awarded trophies. The bake off winners are; first, Anne Cadd who was unable to accept her trophy due to COVID, second Jen Bond and third Tina Latter.

The monthly competition winner was Cynthia May, who again was not at the meeting due to COVID, second Natasha Reeves and third Gill Beasley. The flower of the month winner was Heather Stephenson, second Anne Denton and third Jenny Dabbs.

The April meeting will be held at the Bude Methodist Church Hall on Tuesday, April 12, when the guest speaker will be David Kendrick giving his next instalment on the life of Winston Churchill.