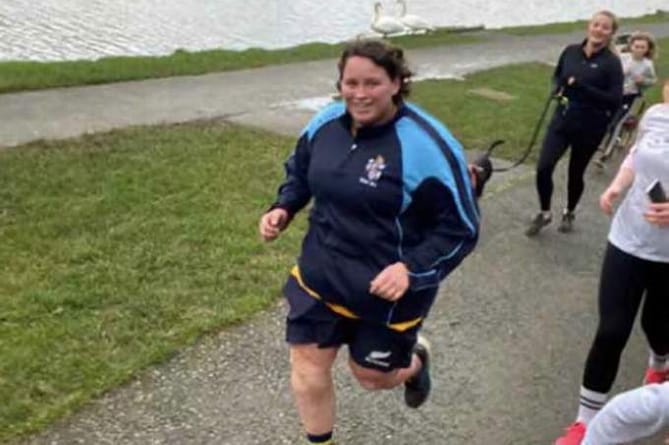 BUDE Rugby Club’s Hannah Pickard has raised nearly £2,000 for Bude Rugby Club after completing a mile of running per day during 2021.

Hannah who is a dairy farmer, explains how the idea - known as ‘Challenge 365’ came about.

She told the Post: “Last year (2020) wasn’t great and I saw that some people were doing a mile a day in January. I thought, why not try doing it for a whole year!

“I wasn’t able to play any rugby, I thought it was something to do!”

Although it takes less than 15 minutes a day, Hannah explains it’s not always easy to fit it in.

She said: “Some days it’s horrendous as I’m a dairy farmer so always busy, and it can be hard to fit in. Sometimes the last thing you want to do after work is go for a run but it’s been really good and helped me with my rugby.

“I’ve tried to go to different places each day such as along the Bude canal, Tamar Lakes, a little road over by the farm near Launcells, the farm track and others.

“It’s definitely surpassed my expectations and it’s already given me an idea for the upcoming year. At some point in 2022 I’m hoping to cycle the Tarka Trail, Camel Trail and the Granite Way in consecutive days which works out at an average of over 40 a day.”

Hannah’s final run was around the footpath by the rugby club which was opened up for her and some of her team-mates who joined her on the final run.

She said: “I’d like to thank everybody for their donations, to people who have sent me messages of support, everyone who came along yesterday and anyone who has ran with me throughout the year.

“I’d also like to thank the club for opening up on New Year’s Eve so we can have a few drinks to celebrate!”

To donate to Hannah’s final total and help her reach £2,000, visit www.justgiving.com/crowdfunding/hannah-pickard-2