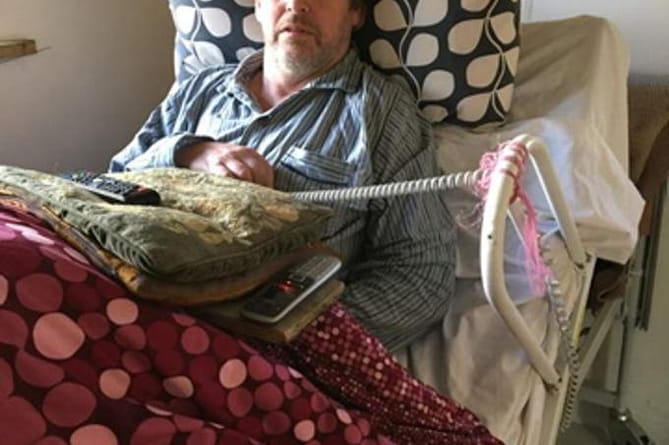 BOB Young at his home in Cornwall ()

When Bob Young’s arranged package of care broke down, volunteers and district nurses could not bridge the gap.

The 58-year-old, who has Multiple Sclerosis (MS), was left without the care he needs for almost a fortnight.

Unable to lift himself or leave his bed, he was left to sit in his own excrement for up to 24 hours at a time. Severely disabled, Bob is reliant on others to fetch him a drink of water and food, and to attend to any of his other needs.

As the Post went to press this week, Bob was told that a place had become available for him at a care home in Launceston. This followed ten days in which his sister Shelagh and Cornwall Council staff had worked around the clock to try and find a solution to an increasingly desperate scenario. Shelagh had also contacted her brother’s Cornwall Councillor and MP, who both became involved.

The situation Bob found himself in is not due to a lack of compassion on the part of those tending to him, says Shelagh, who lives a nine-hour drive away in Scotland.

Rather it is a shocking system failure, she says, caused by underfunding, that means there is simply “no social care available in Cornwall” to meet her brother’s needs.

“I was told that there are only two residential care beds suitable for Bob in the whole of the county,” said Shelagh. “I am also told there are 200 people in Cornwall either stuck in hospital for want of social care or left at home like him. This is inhumane and incredibly costly to the NHS.”

Bob, who lives in Trewen, near Launceston, had up until recently been receiving a daily care package, part-funded by the council, with visits from staff qualified to use a hoist to lift him. But Bob’s behaviour became challenging when his carers told him they were unable to take him outdoors any more. With his mental health deteriorating, Bob became agitated and threatened to self-harm: the provider had gone above and beyond, said Shelagh, but the arrangement broke down when there were no other staff available to step in.

Bob’s physical state also declined: without daily therapy, his muscles go into spasm, making it difficult or impossible for others to help him move.

Bob has always been clear he wishes to stay in his own home, but faced with a worsening situation, he agreed to go into a residential home on a temporary basis. However, there were no places available.

From February 17, Bob was unable to leave his bed, says Shelagh.

“Support provided by community nurses extended to one visit a day to provide continence care.

“On the fourth day of this crisis, adult social care established a pattern of volunteer visits. These were untimed and occasional, meaning he didn’t know if he would eat or drink, or when each day. None of these people could get him out of bed.”

The visits stopped when the volunteers felt he was in too dangerous a state for them to support, and they called 999. Bob refused to go in the ambulance: Shelagh says he is terrified of going into hospital and ending up stuck there.

After his regular care package ended, says Shelagh, “Bob was a prisoner in his own home suffering severe neglect”.

“He was at risk of pressure sores which could lead to sepsis and death. He has been traumatised by this. It was a serious breach of the local authority’s duty of care.”

A social worker started visiting on Friday, and on Monday (February 28) Bob was told a place at the Cedar Grange home was available: he was due to move yesterday.

“I am very impressed with the way the home has responded, they have been swift and efficient in overcoming barriers,” said Shelagh. “Even though Bob looks set to no longer be in danger, he’s not where he should be – at home.

“I suspect he, like many other people, will now face a big struggle to get care at home in place again.”

Former deputy leader of Cornwall Council and ward representative for Launceston North is Cllr Adam Paynter. He described Mr Young’s situation as “complex and difficult” and said he had supported the family and spoken with Adult Social Care to ensure all was being done that could be.

He added: “10 years of Government funding cuts have put councils in a position where they are under massive strain to provide services.”