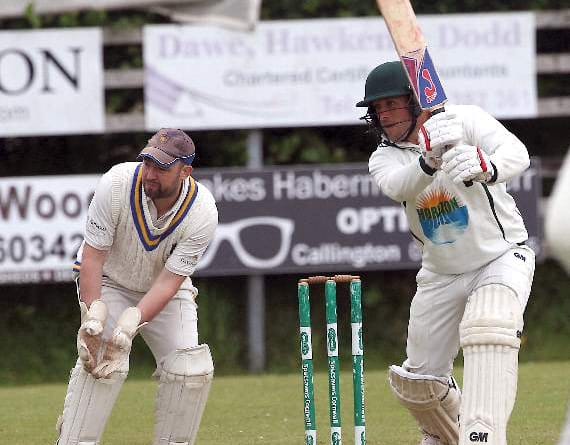 Callington seconds opener Ryan Brown will hope to continue from where he left off last Saturday at Bude tomorrow (1pm). Picture: Glen Rogers

CALLINGTON will look to push towards the top three of the ECB Cornwall Premier League tomorrow when Wadebridge visit Moores Park (1pm).

This is the final game of the first half of the Premier League season with both sides enjoying steady, if unspectacular campaigns so far in red-ball cricket.

Callington have won four and lost three of their eight league games so far, and sit just 11 points adrift of second-placed Truro.

They have beaten St Austell and Werrington in their last two outings while Wadebridge – much fancied at the start of the season to be in the top three – are eighth.

Werrington give a debut to opening batsman Taylor Gerry for the trip to St Austell.

They were bowled out for just 106 against Callington last weekend, and skipper Nick Lawson has made a change, bringing in the teenager off the back of his 118 at Gorran last weekend. He replaces Adam Jenkin who drops into the seconds.

Besides that, Lawson has kept the faith with the same side.

St Austell were left annoyed with the weather last Saturday as when the rain intervened, Truro were just two runs ahead on the Duckworth-Lewis method.

In County One, Werrington seconds welcome fellow mid-table side Beacon to Ladycross.

Werrington picked up a fifth win at Gorran last time out, but have made a couple of changes.

Adam Jenkin will open the batting in place of Taylor Gerry who has gone up, while all-rounder Mark Hodgson comes in as do teenagers Toby Ward and tall seamer Freddie Stevenson who have both been away at school.

Lanhydrock welcome mid-table St Erme looking for a repeat of their last home game which saw them hammer Newquay by seven wickets.

As usual, left-arm spin twins Ruben Turner and Fergus Baker will be key for the Bodmin-based club, who are 40 points clear of the bottom two.

Falmouth visit struggling Newquay, and will expect to win comfortably, meaning all three teams could end the day top.

The other game sees Gorran make the long trip down to Paul, with the clash between Redruth seconds and St Austell seconds is off due to a COVID-issue at the latter.

In Division Two East, there’s a massive day at the bottom of the table, as the bottom four face off.

Tideford in last entertain second bottom St Minver with the losers likely to require a remarkable run of form to survive.

With Gorran and St Austell cut adrift of the Division One table, three sides from all east divisions may go down, meaning they almost have to win. Tideford are already 30 points behind Tintagel who are fourth bottom with St Minver 17 points adrift.

St Minver have brought back all-rounder Will Durrant from Wadebridge and plays, as does Andrew Barrett who returns to the side.

Unsurprisingly for such a big game, Tideford are also much stronger than in recent weeks with opening bowler Chris Anderson and all-rounder Mike Burnett among those back in.

Launceston are 15 behind Tintagel who visit Lawhitton.

Launceston make two changes from last weekend as wicket-keeper Dan Tilley is unavailable, while David Sillifant is dropped down to the seconds.

They are replaced by James Setterington who will be behind the stumps and former captain Kevin Worth.

Also coming in is opener Andrew O’Kelly and bowler Ollie Edwards. They replace batsmen Jordan Burnard and Matt Richie who are both away.

Skipper Toby May makes just one change from last weekend as one hard-hitting batsman replaces another as Leion Cole comes in for Chris Simpson who is in the third team at Newquay seconds.

Bude are again without the injured Sam Hockin, but off-spinning all-rounder Andrew De Rosa is once again after an excellent performance at Grampound Road last weekend.

That means skipper Ryan Walter is likely to bat at three with Shepherd in at four.

Menheniot-Looe have won twice in recent weeks and travel to fourth-placed Roche in good spirits.

Skipper Marc Wright is at a wedding which means pace bowlers Dylan Rundle and Hobie Western are given a chance to impress. Rob Cowley also drops out with Steve Kidd taking charge.

In Division Three East, Launceston seconds find themselves second bottom ahead of the derby at Werrington thirds.

Their ten-point deduction for fielding an ineligible player at Bugle means they are six points behind Werrington in eighth, such is the closeness of the division.

Bude seconds are ninth after a seven-wicket victory over Newquay twos last week, and make the trip to mid-table Ladock.

At the top, Callington thirds make the trip to Newquay, while Boconnoc, 14 points adrift in second host struggling Roche twos at the Deer Park.

Third-placed South Petherwin could make a late bid for promotion, they entertain St Neot at Kennards House looking to gain revenge on the Wenmouth club for their defeat in the Rosevear Cup.

Luckett enjoy a healthy lead at the top of Division Four East ahead of their game at St Blazey seconds.

The Chapel Field club bowled second bottom Duloe out for just 26 last week, and are unbeaten all season.

Milton Abbot will hope to push towards the top three when they visit out of form Saltash St Stephens, while Duloe need a ‘pick me up’ when they head down to Grampound Road thirds.

Liskeard went top of the table last weekend when they won at Tideford seconds, and the Lux Park outfit will hope to stay there following the visit of Werrington fourths.

With eight games remaining, Liskeard are six points clear of St Stephen, while Werrington are sixth.

The other games see Tintagel twos welcome their Tideford counterparts who will look to bounce back from being bowled out for just 30 last Saturday, and St Minver seconds host Foxhole.

The top two meet at Stanhope Park in Division Six East as Holsworthy seconds face of with Boconnoc twos.

An away win would likely see Boconnoc wipe away the 12-point deficit, but a Holsworthy victory means they would probably have to lose at least twice in their final nine games to give Boconnoc any sort of chance of taking the title.

The other four teams in the division have no real chance of securing promotion.