Uglow hammers St Blazey before the rain sets in 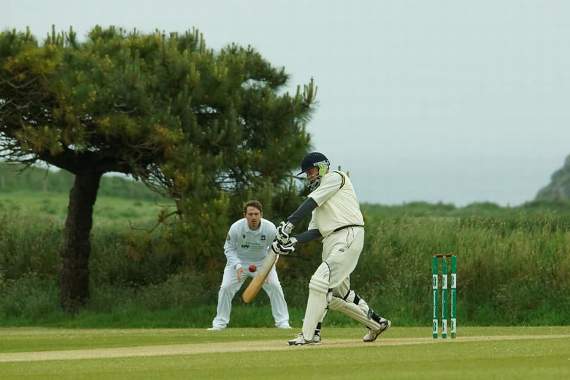 GEOFF Uglow crashed 67 not out in just 14 overs before the rain ruined Tintagel’s chances of victory against St Blazey in Division Two East.

On a day when the weather changed throughout, St Blazey were sent into bat by home skipper Ryan Pooley and made 215-8 thanks to half centuries from Rory Dixon (70) and Jowan Isbell (57).

Uglow smashed six sixes and four boundaries as Tintagel reached 108-1 after 14 overs, before the rain set in and play was called off.

St Blazey went into the game having registered their first league victory of the season at home to St Minver before surprising Callington in their opening Division Two T20 Cup game, and in Dixon have a player who has scored half centuries in County Division One for Gorran.

After debutant Darren Livett had Dan Kendall caught behind by Tom Harris early on for nine, Dixon and Isbell took advantage of a good pitch and small boundaries to add over 100 for the second wicket.

Isbell looked to hit it through the leg-side while the classy Dixon played in a much more trademark fashion before a drive at Jonathan Labuschagne’s off-spin saw him skew a catch to Matt Pethick at point.

However, to Tintagel’s credit, they stuck at the task well, keeping them down to a below par 215-8.

Livett went for just 23 off his 11 overs, while Jordan Blanchard made it 17 wickets in just five innings since his move from Delabole with 3-61, while spinner Simon Fry chipped in with 2-13 off four.

With the weather around, Tintagel decided to attack with Pooley asking Uglow to open.

He took opening bowlers Keith Reid (0-22) and Miguel Cardoso (0-17) as both were taken off after two overs apiece.

Jordan Burnard (16) and Pooley (13no) provided Uglow with good support, with Burnard the only wicket to fall, caught at long-on off the off-spin of Dixon.

Five of Uglow’s sixes went over long-on, the last of which went into the adjoining field, which in the eyes of the visitors damaged the ball.

They then proceeded to leave the field, with the game never restarting.

Pooley was left unimpressed with St Blazey’s decision to call the game off.

He said: “When the weather came in, the ball had got wet from Geoff hitting it into the next field with foot-long grass.

“At the end of the 14th they just walked off the pitch. We stayed out there as it was only light drizzle that we fielded the majority of their innings in, but we didn’t moan as obviously we were hoping that they’d return the favour. But evidently not, so we just have to get on with it.”

Despite the disappointment, Pooley was full of praise for his side.

He said: “It was a really good all round performance from us.

“Early on the bowlers bowled well for little reward, beating the bat on numerous occasions, and we were very sharp in the field all things considered, not even dropping a catch.

“Darren was a very good addition, bowling at good pace and beating the bat a lot. Hopefully we can get him in for several more games.

“Then when we batted, Geoff was brilliant from ball one, including taking 17 off the first over of the innings.

“He hit the ball so cleanly, which allowed me and Jordan to just feed Geoff the strike as well as put the odd bad ball away.”

Tintagel will be put to the test this Saturday as they visit second-placed Callington seconds.

Pooley added: “We are really excited about this weekend but it’s going to be a very tough game against Callington as they have a really strong side.

“But we will just try and do what we’ve been doing recently and pick up as many points as possible.”