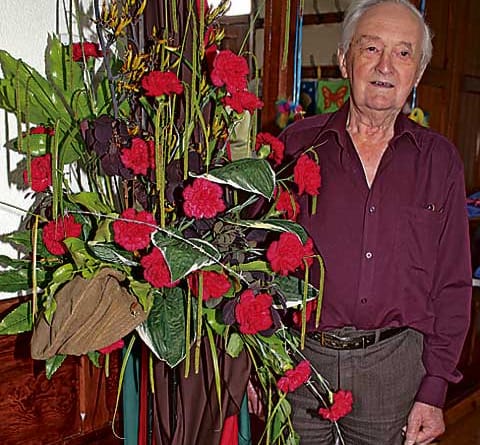 WITH his display entitled ‘First World War 1914 to 1918 Tank Regiment’ is John Littlejohns of the badminton club. Picture: Paul Hamlyn ()

A VILLAGE church, celebrating its centenary year started proceedings with a well-supported flower festival and two special services. Morwenstow Methodist Church was opened on June 18, 1914, just four months after Charlie Chaplin's first film was released and six weeks before the outbreak of the first world war. The new 'Wesleyan Chapel' in the village of Shop replaced the old dilapidated building at Woodford, which was described at the time thus: 'The walls are coming out, and the roof going in. In fact the appearance is more like a farm than a place of worship'. The old chapel dated back to 1815, and was then the only place of worship between Bude and Bideford. The centenary was celebrated with two special services and a flower festival, all of which were well attended. For the full report, and a round up of the area news and sport, see this week's edition of the Post.