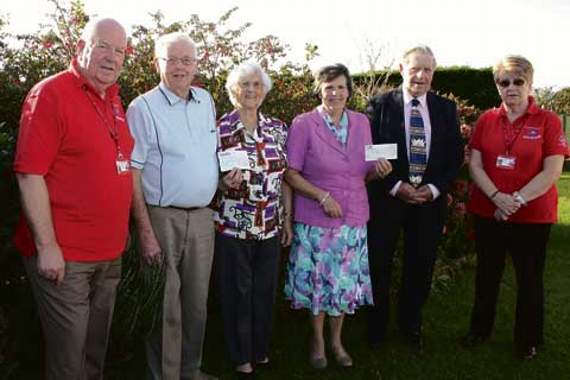 Bill Cleave said: “We chose to support Devon Air Ambulance as we are very aware of the importance of this service to our community. Over the years people in Morwenstow have been airlifted by them on quite a few occasions. As we were celebrating with a party, it seemed to us to be a good time to ask for voluntary donations for this charity instead of people giving us things we do not need”.

Morwenstow is the most northerly parish in Cornwall and is situated on the Devon border, just over 30 miles from the nearest general hospital, North Devon District Hospital (NDDH). Bill Cleave added: “In the summer the roads to NDDH can get very congested”.

Valerie Tape said: “Colin and I were very keen to support Devon Air Ambulance as we live on the border and often see the helicopter fly over and back to Barnstaple. Regularly seeing the helicopter is a reminder of how much we need this service”.

DAA fundraising director Caroline Creer said: “We are extremely grateful for the support from Bill, Edith, Valerie and Colin. Their address is Cornwall and we never want to deflect fundraising from a supporter’s local air ambulance, but due to the parishes positioning on the Devon border we are often dispatched to attend incidents in Morwenstow. We have a very good working relationship with Cornwall Air Ambulance Trust (CAAT) and as we say here at DAAT there are no county lines in the sky, we are here to provide a service to those in need.”

DAAT volunteers Pete and Kathy Lambourn attended a cheque presentation at the home of Bill and Edith Cleave on Friday, October 21, to receive the funds on DAAT’s behalf.